The four-story building features 82 mixed-income apartments, including 36 affordable units designated for workforce housing. It is named after the school for predominantly African-Americans that was once on the site.

“We celebrate with the community today the completion of this phase of the Jackson Ward revitalization project,” says Erik Johnston, director of the Virginia Department of Housing and Community Development. “Increasing the availability and affordability of housing throughout Virginia is possible because of city and community leadership combined with the support of the governor and general aassembly who have increased the state housing trust fund to invest in innovative projects just like this.”

Although primarily new construction, the project also included the adaptive reuse of an historic convent into eight of the multifamily units. The project also preserved a garden established by the Catholic Diocese to commemorate the former site of St. Joseph’s Catholic Church, believed to be the first Catholic congregation for African-Americans in the South. The complex also features 6,000 square feet of retail space.

All residents of The Rosa previously lived in Fay Towers, a 200-unit senior community built in 1976. The ribbon cutting of The Rosa marks the completion of the second phase in a three-part process of enabling Fay Towers residents to move into new, modern homes. The first stage of the process was completed in 2016, when 77 seniors moved into the former Highland Park Public School, which ECD fully renovated. The final phase, currently under construction, is the adaptive reuse of the former Baker School into 50 additional homes, with an expected completion of early summer 2021.

Grimm and Parker was the project architect, while Harkins Builders was the general contractor. 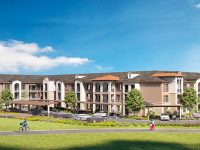 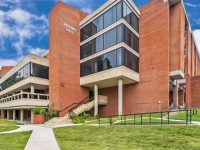