Demand and occupancies hold firm as sponsors retool for the next wave of residents.

Ask Warren Spieker about the health of the continuing care or life plan sector, and the project owner and advisor will offer a blunt assessment: “People have been predicting the death of the entrance fee community since 2007,” he says. And so far those predictions have been wrong, Spieker is quick to point out. “The model is powerful.”

Apparently so. As managing partner at Continuing Life, an entity that oversees the development and operations of for-profit life plan communities, Spieker represents a segment of the industry that is performing well. Despite competition from a wave of new freestanding projects, life plan communities have maintained relatively healthy occupancies.

Owners are expanding existing properties and selectively adding rental options where it makes sense. Big new entry fee projects — which can cost upwards of $200 million to build — are becoming less common, but a handful are breaking ground. At the same time, all-rental communities are growing in popularity.

Financing is available for sponsors with a track record. They’re betting that baby boomers will see the advantage of knowing where and how they’ll live for the last chapter of their lives.

Perhaps most importantly, the residential housing market is strong. Retirees can sell their homes and use the proceeds to pay high rents and hefty entrance fees, a situation especially true in high-priced housing markets such as California.

Continuing Life has five entrance-fee life plan communities in California. The company provides business and advisory services to the communities, which are managed by Des Moines, Iowa-based Life Care Services (LCS). Each project has a slightly different set of investors, and Spieker holds an ownership position in several of the communities.

Continuing Life recently opened Reata Glen in San Juan Capistrano. According to Spieker, whose office is in Carlsbad, Reata Glen is one of the biggest retirement communities in California. The development includes 480 residential units. A health center, planned to open in about a year, will have 120 units in a mix of assisted living, memory care and skilled nursing.

About 65 percent of the units are reserved, says Spieker. Sales have been going so well that the entire independent living portion of the community, along with the clubhouse and amenities, were built all at once instead of in phases. “We are aggressive,” says Spieker, noting a portfolio-wide occupancy rate of 98.5 percent.

Overall, continuing care or life plan communities have fared well in a competitive seniors housing marketplace. “The segment has had some decent growth,” notes Lana Peck, a senior principal with the National Investment Center for Seniors Housing and Care (NIC). The nonprofit 501(c)(3) organization, which is based in Annapolis, Maryland, tracks the life plan market.

Notably, more units were sold or rented out than were built during all of 2018 and the first quarter of 2019, which boosted occupancy rates, according to NIC

More specifically, inventory in NIC’s 99 primary and secondary markets grew by 1,792 units in 2018, with 2,064 units absorbed. That means 272 more units were filled than were added. In the first quarter of 2019, inventory growth was 143 units with 699 units absorbed. In short, 556 more units were filled than added. “There’s a lot of demand,” says Peck.

Occupancies remain strong. In the first quarter of 2019, entrance-fee life plan communities recorded an overall occupancy rate of 92.5 percent, according to NIC. Occupancies at rental communities stood at 89.4 percent. By region, occupancies are generally highest in the Mid-Atlantic area (93.3 percent) and lowest in the Southwest (87 percent).

New construction activity has been tempered, which has helped contribute to relatively high occupancies. About 10,000 units are under construction, including both new ground-up developments and expansions. The total inventory of existing units is approximately 384,000.

About one-third of the units underway are in five markets: Dallas, Los Angeles, Indianapolis, Washington, D.C., and San Diego. More rental units are under construction (5,839) than those contained in entrance-fee communities (4,177) in those five markets. Most new units are for independent living.

Construction financing is readily available from a variety of sources, according to Jim Bodine, executive vice president at H.J. Sims, an investment banking firm. Bodine’s office is in Philadelphia.

Two of the primary financing sources are banks and, for nonprofit sponsors, tax-exempt bonds. While the cost of financing and the characteristics of the deals struck are favorable today, much depends on the credit profile of the sponsor, says Bodine. Organizations with a moderate credit standing can secure financing. “Experience and track record of the sponsor are important,” he adds.

A healthy housing market is another important factor.

Homeowners typically use the proceeds from the sale of their home to pay the entrance fees at life plan communities. In many instances, they’ve owned their home for a long period of time and have little or no mortgage debt. In the aftermath of the 2007-08 recession, homeowners couldn’t sell their houses. Sources say that is no longer a concern.

The healthy increases in home prices achieved the last several years are starting to moderate, but remain positive. National home prices rose 3.7 percent annually in March, down from 3.9 percent in February, according to the Case-Shiller Index, a composite of
single-family home price indices for the nine U.S. Census divisions.

The residential real estate market has held up fairly well in this cycle, says Bodine. He wonders, however, which way prices will trend eight quarters from now, since new or expanding life plan communities have a long lead time from a development standpoint. “We watch that,” he says.

Housing prices differ by region. Naturally, expensive housing markets can support more expensive life plan communities. In California, for example, the median home value in 1970 was about $25,000, according to the California Association of Realtors. In 2018, the median home price was slightly over $600,000.

Most of today’s retirees who purchased a home 50 years ago have realized hefty gains in the value of their properties, notes Continuing Life’s Spieker. They can use those gains to pay the entry fee and in return enjoy a new lifestyle and the community amenities.

Residents also get cost predictability, says Spieker. Monthly fees at Continuing Life properties won’t increase more than $1,100 if their health declines and they need more care. “It’s an incredible bargain,” he says, adding that residents get at least 75 percent of their entrance fees returned after they leave the community and the unit is resold.

Scheduled to open by the end of this year, RiverWoods Durham will contain 150 independent living apartments as well as a 72-bed health center comprised of 24 assisted living units, 24 memory care units and 24 skilled nursing beds.

Located near the sea coast and just 45 minutes from Boston, the Exeter communities are popular and have a 300-person waiting list, according to Justine Vogel, president and CEO at The RiverWoods Group.

Units at the new Durham project sold out in 29 days, she says. Another 88 depositors are on the waiting list.

Quick sales meant the Chicago-based investment bank Ziegler was able to arrange an all-bank financing package with a low cost of capital, saving the RiverWoods organization about $1 million a year in interest payments, according to Vogel. Lenders include TD Bank, People’s United Bank and SunTrust Bank.

Initially, the RiverWoods Group had considered creating a moderately priced community in Durham. Instead, about one-third of the units are moderately priced. “We were able to broaden our market and still offer a really distinct way of living,” says Vogel.

While new projects face a number of hurdles, sponsors are looking for different approaches to expand and upgrade existing properties.

Small, satellite communities are becoming more popular, says Lisa McCracken, director of senior living research and development at Zielger. These are not expansions on the same campus, but entirely new locations.

For example, a life plan community on the outskirts of a metro area might also develop a building downtown. The building would strictly include independent living apartments, but not assisted living, memory care or skilled nursing. Instead, the senior care products would be available at the sponsor’s other location. “The term continuing care is really being redefined today,” says McCracken.

Canterbury Woods outside of Buffalo, New York, has a downtown satellite campus. “This is one of the more common development concepts,” says McCracken.

Expansions and repositionings are becoming more common too. This approach is less expensive than a new project. Many life plan communities are 20 to 30 years old and need an update anyhow.

The vast majority of new construction consists of expansions of existing life plan communities. There were 76 expansions underway in the first quarter of 2019, according to NIC, compared with 18 brand new projects. Seventeen of the new projects are rental models.

Sponsors recognize the need to upgrade their facilities. In fact, 72 percent of nonprofit life plan communities say they will expand or reposition an existing campus in the next two years, according to LeadingAge-Ziegler 200, a ranking of the largest nonprofit providers in the seniors housing space that is published annually.

Most of the expansions include the addition of independent living units and improvements to common areas, says McCracken.

Northcrest Community in Ames, Iowa, is expanding. Opened in 1965, the community has a waiting list of 250, according to Linda Doyle CEO/administrator at Northcrest, a nonprofit community.

A new multipurpose room, pub and wellness center are also being built.

The new buildings are expected to open in 2020.

Rolling Green Village in Greenville, South Carolina is in the midst of a repositioning. The nonprofit community serves about 650 residents on a 175-acre campus that was built in 1986. The property includes 291 age-restricted patio homes that are owned by residents.

“The amenities are 30 years old and undersized for the community,” says Nick Herrick, project development manager at LCS Development, which is leading the renovations.

Like expansions, extensive repositionings are becoming more common for many of the same reasons. New life plan communities have a long lead time and are very expensive to build.

The stock of existing life plan communities is also aging, says Herrick. “We offer master planning for the future.”

The $67 million repositioning at Rolling Green Village includes 60 new apartments in a three-story building and 23 duplex cottages. About 40,000 square feet of common space is also being added with an art studio, new dining venue and lounge. A new front entrance with a modern, open lobby will replace the old entrance at the back of the property.

The project is slated for completion in 2020.

The repositioning will be a big change for Rolling Green Village, which has mostly been associated with the stand-alone patio homes, says Herrick. “The public will have a different view of the community.” 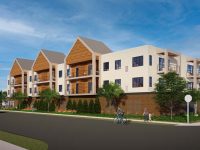