Appraisers are forced to react to a seniors housing industry in a constant state of transformation.

Seniors housing has undergone some rapid adjustments in recent years, such as the sea change in skilled nursing and the rush of new investors into the sector, with more change on the way. Appraisers, who above all seek to take an objective, unbiased look at the value of seniors housing properties, have a front-row seat to this evolution of the industry.

When asked the storyline of the last 12 months in seniors housing, JP LoMonaco, president of California-based appraisal firm Valuation & Information Group, had a quick synopsis: “It can be summarized in a few words: restructuring, dispositions and turmoil.”

“We’ve seen a lot of the large institutions in our industry go through a lot of strategic shifts, which has unleashed transactions. The reverberations of those actions will continue for a while,” says LoMonaco.

Year-over-year sales volume has generally decreased since the transaction heyday of 2015, as large, institutional buyers have sat on the sidelines. Although smaller buyers such as private equity firms stepped up their transaction activity, it hasn’t been enough to make up for the reduction in activity by the massive, publicly traded REITs. For example, in the first quarter of 2018, year-over-year sales volume was down 38.5 percent, according to RCA.

The buying/selling spree of 2014 and 2015 (where year-over-year increases were as high as 141.2 percent in the second quarter of 2015) may have set expectations of buyers and sellers too far apart, according to Jim Costello, senior vice president with RCA.

The industry has seen signs of oversupply, hitting record-low occupancy levels in both skilled nursing and assisted living. But capitalization rates have stayed steady for assisted living and independent living (hovering around 7 percent) and price per unit actually went up from $113,680 to $118,076 from the first quarter of 2018 to the second quarter.

“When you had interest rates falling to record low levels, it was easy to bring buyers and sellers together on price. We’re past that point,” says Costello. “Now buyers have to underwrite more carefully. But sellers aren’t motivated to sell, because if I have a good, cash-flowing asset, why sell it? There’s a bit of a disconnect on price expectations.”

This is the backdrop that appraisers in the seniors housing space look to when analyzing the value of properties.

“The disruption that this amount of new development is going to cause over the next three to five years will remain the storyline in seniors housing for quite a while,” says Alan Plush, CEO of valuations firm HealthTrust. “If a town could support two new facilities, four have been built. That’s what I’ve seen everywhere. We’re going to be wrestling with this as an industry.”

Overdevelopment also stretches the labor pool thinner, which damages operations. With seniors housing being such an operations-intensive business, labor issues have a major effect on value as appraisers must forecast net operating income, according to Bennett Johnson, vice president with the Seniors Housing and Care Practice Group of CBRE Valuation & Advisory Services.

“I can barely go a day without something coming up about the challenges of staffing. We’re starting to see it impact the bottom line at properties as it affects overall performance. It’s a challenge for our industry, and we’re really starting to see it play into the valuations.”

But if overbuilding is truly such a strain on the industry, why are the prices per unit staying high and the capitalization rates remaining low?

In short, interest in the sector is simply that strong right now. As investors look to future demand, many buyers are willing to pay the higher prices, according to Charles Bissell, managing director with the valuation and advisory services group of JLL.

“What we’re seeing is a period where there is so much capital seeking to get into seniors housing and so many of the existing players have capital to deploy, that competition is creating an environment where values have not declined even where there are issues of occupancy.”

But at the same time that new supply is coming online, many new investors are entering the space, adds Michael Baldwin, president of healthcare property valuations firm OHC Advisors. “Even while people are building, there’s more demand for those properties.”

All of these factors raise an important question: If interest rates are going up and development is depressing occupancy levels, but price per unit and cap rates don’t adjust, is the industry creating a bubble?

The booming U.S. economy is currently “long in the tooth,” according to Bissell, and overdue for a recession that he anticipates will hit within five years. Although he predicts a decline in seniors housing valuations, he expects demand to temper that decline.

“We’re not facing a severe bubble like in the past. I could see some decline in pricing, but we are in an environment where so much capital is looking to get into this industry due to the long-term demographic trends that I do not think we’re going to see a significant decline in valuations.”

Plush echoed the sentiment that at least a slight recession is on the horizon.

“There will definitely be a correction in the near term in seniors housing. When that happens, it’s good for appraisal firms that really have credibility, that are good at what they do. It weeds out the Johnny-come-latelies.”

A complicating factor of valuing seniors housing properties is that, more than most types of commercial real estate, operations must be factored into the value. When it comes to succeeding, the importance of the bricks and mortar pales in comparison to the services provided.

“These are purpose-built assets, generally, so the operations side is very tied in with the value,” says CBRE’s Johnson.

“Going back five years ago, staffing wasn’t something from an appraisal standpoint we’d focus on as much. Now when we’re touring those properties, we’re asking those questions: ‘Do you have any key staff vacancies? How is it finding frontline staff? Are you using any agency staffing?’ Those [factors] all play a role in how we look at the value.

“Everyone loves cap rates because they’re simplistic. Figure out the NOI, grab the calculator on your smartphone, and you know the value. But it’s not that simple. You really need to dig in on the underwriting — occupancy and expenses have more impact on the value than the cap rate.”

This focus on management is the reason that we’ve seen “a rise of the regional operator” in recent years, according to LoMonaco. Operators that focus on succeeding on a medium-sized scale have been eating up market share.

“National and bigger was always considered better, but more recently the regional operators have become the most desired types of operators out there,” says LoMonaco. “They’re large enough to deal with the complexities of the industry, but not so large that they lose sight of any regions or properties in their portfolio.”

There could be more operator consolidation and expansion on the way as a result of this trend, according to Bradley Schopp, managing director in the healthcare and seniors housing group of Integra Realty Resources (IRR).

As the healthcare industry as a whole moves toward a system focused more on outcome-based care rather than fee-for-service care, only the strong operators will survive.

“As the market in general moves to be more focused on value, the unsophisticated operator may find it more difficult to compete,” says Schopp.

“There could be a lot of buying opportunities for existing owner-operators to take over some of these buildings and start turning some profit.”

Of course, this doesn’t mean the physical location can be ignored. OHC’s Baldwin is quick to note that a poorly performing operator can be replaced. Once completed, though, a building is locked into its market and location.

“There are two strategies employed in a seniors housing community: a geography strategy, and a brand and marketing strategy,” says Baldwin. “You need to have both of them right to do well, but you can never change the geography portion. That’s why the market study is of the utmost importance.

Another type of consolidation has IRR’s Schopp concerned: As large companies snatch up smaller valuation firms, often under the umbrella of a brokerage, the appraisal industry could be losing its independence. In a role where objectivity is paramount, being rolled into a company that has a vested interest in deals getting done raises red flags.

“We need independence. Many appraisers work better outside of their parent company,” says Schopp. “We serve as an objective measure.”

HealthTrust’s Plush also emphasized the importance of objectivity, and notes that valuation firms that don’t enforce that practice are not long for this world.

“The appraiser’s job is to be accurate, period. Above all, accuracy is the most important qualification an appraiser can bring. I think that’s where the industry fails a lot. I’ve done this for 34 years now. I’ve seen appraisers come and go, and the ones that stay around are the ones that know when to say ‘no’ to a new development.”

LoMonaco notes that the company ordering the appraisal must also take the results seriously, not just as an annoying step in the process.

“Sometimes appraisals are ordered because it’s a requirement of an lending institution, but the institution really just uses it to check a box and doesn’t demand the quality or insight to really help make a good decision. I refer to those as doorstop appraisals. The company orders them then uses them as a doorstop. That cheapens the entire appraisal process and the need for appraisals going forward.”

The appraisers generally don’t expect any dramatic changes for valuations going into 2019. Oversupply will continue to be an issue, but demand and absorption will remain strong, so valuations should stay relatively steady.

“For the next year I see more of the same,” says JLL’s Bissell. “Most of the new development is going to be more urban-focused. We’ll continue to see strong buyer interest in the M&A market, and interest rates will continue to creep up slowly.”

“On a personal level, I hope that we have continued transparency in the space from a data standpoint,” adds CBRE’s Johnson. “From an industry standpoint, we need to work through challenges with staffing and the operations side of the business. There’s every indication we’re going to find a solution, and that will be key to maintaining valuations.” 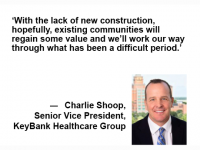 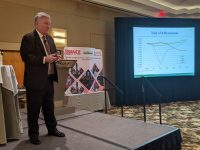