The first transaction was an $11.2 million HUD loan for an affordable assisted living community in Dallas. Jay Healy arranged the financing via the 232/223(f) program for a Texas-based, nonprofit borrower. The loan retired both the construction and mezzanine debt tied to the project. At the time of underwriting, occupancy hovered around 90 percent.

The 128-unit assisted living community was constructed in 2015 in partnership with the Dallas Housing Authority, the ground lessor.

The second transaction encompassed two loans through HUD’s 232/233(f) program secured by Ed Williams, which resulted in aggregate loan proceeds of $9.4 million for an Idaho-based borrower. The first loan involved the refinance of a 36-bed standalone memory care facility in Flathead County, Montana compromised of two buildings: a purpose-built memory care building constructed in 2010 and a renovated, eight-bed memory care building constructed in 1990.

At the time of underwriting, occupancy at the facility was 88 percent. The $6.7 million, 35-year term loan represents a 72 percent loan-to-value ratio and debt of $174,000 per bed. Loan proceeds allowed the borrower to refinance the existing debt through HUD.

The second loan comprised the refinance of a 45-bed assisted living facility located in Yakima County, Washington. The 35-year term, $3.2 million loan represents a 76.2 percent loan-to-value and debt of $70,000 per bed.

Loan proceeds from this transaction were also used to refinance the existing debt through HUD. The 1995-vintage facility was purchased in 2018 as a vacant building. The borrower completed approximately $500,000 in renovations and reopened the community in June of 2019. At the time of underwriting, occupancy at the community was 95.7 percent. 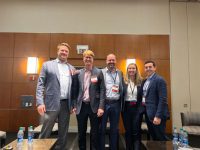