Some investor types have doubled down while others have fled seniors housing as the COVID-19 pandemic enters its third year.

COVID-19 has changed many investors’ approaches to the seniors housing sector.

The pandemic caused a major shift in who’s buying and who’s selling. Some of the biggest buyers in 2019 were the biggest sellers in 2021. For example, institutional investors went from buying more than $2 billion in 2019 to selling more than $3 billion through the first three quarters of 2021.

That’s according to Real Capital Analytics, a New York City-based data firm. The numbers are based on publicly announced deals over $2.5 million.

“There still is an element of fear and uncertainty,” says Jim Costello, senior vice president with Real Capital Analytics. “We saw early in the pandemic that some of the management issues resulted in more fatalities. It’s not the problem now that it was then, but that comes with higher costs. More spending has to be done to mitigate the risks involved. That changes the investment opportunities.”

These changes have led to a growing bid-ask spread in the marketplace. Buyers aren’t willing to spend as much, knowing that expenses are higher now, but sellers aren’t necessarily willing to reduce prices, says Costello.

Costello also notes that the COVID-induced recession was very different from the 2007-2008 global financial crisis, which led to banks around the world incurring losses and relying on government support to avoid bankruptcy. In the case of the pandemic, investors still had money to spend. While some lenders wouldn’t touch seniors housing, “debt capital was still easily available.”

“Buyers had cash,” says Costello. “This recession was different.”

While institutional investors switched from buying to selling, private investors did the opposite. After being net sellers by over $2 billion in 2019, they swept in during the pandemic to buy $1.2 billion more than they sold in 2020. Private investors were net buyers by approximately $564 million through the first three quarters of 2021.

However, Costello notes that this came almost entirely from one source. As part of its plan to exit the rental seniors housing market, Healthpeak (NYSE: PEAK) sold 32 properties to Toronto-based Brookfield Asset Management for $664 million. Sunrise Senior Living manages the 3,235 units in the portfolio.

Healthpeak’s disposition spree is also a major part of why REITs sold $306 million more than they bought in the first three quarters of 2021, and why private investors were net buyers.

By the end of third-quarter 2021, Healthpeak had completed its exit from rental seniors housing, CEO Tom Herzog said on the company’s third-quarter earnings call.

“On the transaction front, we closed our remaining $150 million of rental seniors housing sales, bringing total sales since July of 2020 to $4 billion,” said Herzog. “We redeployed the entirety of the sales proceeds into our core life sciences and medical office building acquisitions, and debt reduction.”

While REITs as a whole were net sellers in 2021, this investor type still made nearly $5.5 billion in acquisitions through the third quarter. This is largely a result of Welltower (NYSE: WELL) and Ventas (NYSE: VTR).

In a presentation regarding the acquisition, the company described the portfolio as having an “attractive valuation below replacement cost.”

“The portfolio consists of 103 independent living communities located in attractive markets with favorable demand characteristics,” said Justin Hutchens, executive vice president of seniors housing at Ventas, on the company’s third-quarter earnings call. “Integration efforts have gone extremely smoothly and we are on track to realize our expected synergies. We are pleased with the performance and operating trends of the portfolio.”

Welltower also made billions in new seniors housing investments. In fact, on Welltower’s third-quarter earnings call, CEO Shankh Mitra described it as “one of the most active quarters in the history of our company.”

“We closed $2 billion of investments at a significant discount to replacement cost, with expected IRRs [internal rates of return] in the high single digits to low double digits,” said Mitra. “We continued our momentum subsequent to the end of third quarter with another $1.3 billion in transactions.”

(For a summary of Welltower’s transactions, see leasing story on page 25.)

Overall, REITs acquired 283 seniors housing properties through the first three quarters of 2021, and most of those were large-scale portfolio or entity-level deals, says Costello.

“Entity-level deals are not a big story in many other property sectors, but they are in seniors housing,” says Costello. “That consolidation-type activity, it’s easier to do that when people feel stressed about pricing in the sector.”

Costello goes on to note that only retail and seniors housing saw such a high frequency of entity-level deals in 2021, as the two sectors struggling the most with the pandemic.

“For apartments and industrial, prices are going up at double-digit rates, so you’re not seeing a lot of entity level deals. You can’t take down a bunch of properties at once [because it’s too expensive].”

As for the “why” part of the equation, Mitra said that while the pandemic may continue to endure, all signs are pointing upward for the seniors housing sector. Residents feel safe in the communities due to high vaccination rates, occupancy continues its recovery and prices are very low compared to replacement cost.

“Just six months ago, many industry participants and observers were cautioning that the COVID pandemic would result in impairment of demand for seniors housing. And even most people who believe that the demand would come back were worried that with every surge of the virus, the business would take a significant step back,” said Mitra. “But despite witnessing a significant surge of the Delta variant, we still posted the strongest sequential revenue growth in the company’s history.”

“We built significant top-line momentum in our business as we received the dual benefit of occupancy and [rental] rate growth,” concluded Mitra. “In fact, I believe this trend will meaningfully accelerate into next year as we feel significant momentum in the rate environment.” 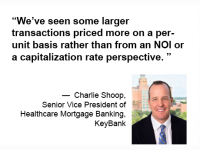