CLEVELAND, Tenn. — Life Care Centers of America Inc., an operator of more than 220 skilled nursing, assisted living and memory care communities in the United States, has agreed to settle a government lawsuit against the company and its owner and founder, Forrest Preston, for $145 million.

The United States Department of Justice claims Life Care violated the False Claims Act by “knowingly causing skilled nursing facilities (SNFs) to submit false claims to Medicare and TRICARE for rehabilitation therapy services that were not reasonable, necessary or skilled.”

“This resolution is the largest settlement with a skilled nursing facility chain in the department’s history,” says Benjamin Mizer, head of the Justice Department’s Civil Division. “It is critically important that we protect the integrity of government health care programs by ensuring that services are provided based on clinical rather than financial considerations.”

Life Care, which is based in the Chattanooga suburb of Cleveland, will pay $45 million up front, and the balance of the settlement over the next three years. Despite the settlement, Preston continues to claim the company did nothing wrong.

“We deny in the strongest possible terms that Life Care engaged in any illegal or improper conduct,” says Preston. “We are, however, pleased to finally put this matter behind us, without any admission of wrongdoing, and we look forward to continuing our efforts to deliver quality care and services to our patients, residents, and their families.”

The Justice Department allegations claimed that between Jan. 1, 2006 and Feb. 28, 2013, Life Care created “corporate-wide polices and practices” to put as many patients as possible into the highest Medicare reimbursement category, regardless of the patients’ actual needs. The lawsuit also claimed that Life Care tried to keep patients longer than necessary to extend Medicare billings.

The government also sued Preston personally, claiming that as the sole shareholder of the company, he was “unjustly enriched by Life Care’s fraudulent scheme.” The lawsuit against Preston was included in the settlement.

As part of the settlement, Life Care has agreed to a five-year, chain-wide corporate integrity agreement with the Department of Health and Human Services Office of Inspector General. The agreement stipulates that an independent review organization annually assesses the medical necessity and appropriateness of therapy services Life Care bills to Medicare.

“Therapy provided in skilled nursing facilities must be medically reasonable and necessary, and we will continue to vigorously investigate companies that subject their residents to needless and unreasonable therapy,” says Daniel Levinson, inspector general of the Department of Health and Human Services. “The corporate integrity agreement with Life Care is designed to ensure that it only provides therapy based on the individual needs of each resident.”

Lifespace Opens Health Center at CCRC in Illinois to the Public November 15, 2018

Benchmark CCRC in Connecticut Partners with APRN Group Ahead of Medicare Mandate September 28, 2016

Certificate of Need Laws and Nursing Facilities: The Good, the Bad and the Ugly September 29, 2021 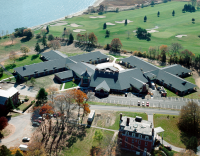