FORT WORTH and DENTON, Texas — An affiliate of Livingston Street Capital has acquired a portfolio comprising two active adult communities totaling 402 units in the Dallas-Fort Worth area of Texas.

These assets bring Livingston’s active adult and independent living portfolio to nearly 600 units in the Dallas-Fort Worth market and more than 1,500 units nationally, according to Peter Scola, founder, president and co-CEO of Livingston Street Capital.

“As we continue to identify and target communities in locations throughout the country that offer the quality of life that today’s 55-plus residents desire, we’ve been bullish on the Dallas-Fort Worth area based on its balance of metropolitan conveniences and outdoor amenities that promote independent, robust lifestyles,” explains Scola. “The MSA features exceptional in-place demand from this demographic, with the population aged 65 to 79 increasing 74 percent over the last 10 years and expected to grow an additional 24 percent by 2025, according to Esri data.”

The purchase of this portfolio, which comes on the heels of the firm’s first acquisition in the market, Haven at Lewisville Lake in Lewisville, will allow Livingston to leverage existing relationships, amass economies of scale, and continue to build upon a strong reputation regionally, notes Scola.

The previous ownership invested in significant capital upgrades at both The Spring at Silverton and Sunstone Village, expanding and enhancing amenities. 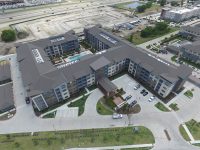