ANNAPOLIS, Md. — Seniors housing occupancy increased to 88 percent in the third quarter of 2019 from its lowest level in eight years (87.7 percent) recorded during the previous quarter, according to data from the National Investment Center for Seniors Housing & Care (NIC).

San Antonio experienced the largest occupancy increase from a year ago, rising from 80.2 percent to 84.6 percent. Baltimore saw the largest year-over-year decrease, falling from 92.5 percent to 90.6 percent.

“San Jose retains the distinction of having the highest occupancy rate of any major market in the country, as significant barriers to entry constrain development,” says Chuck Harry, NIC’s head of research and analytics. “Houston, on the other hand, places fewer restrictions on development, which is pressuring occupancy.”

During the quarter, net new unit demand totaled 4,977 units, the greatest number of new units in any quarter since NIC began reporting the data in 2006. At the same time, the quarterly change in the number of units added to existing inventory slowed to 3,832 units, the fewest since mid-2016. The data suggest a possible slowdown in new senior housing construction.

“The data suggest strong consumer demand for assisted living and independent living, which supported the overall increase in the national occupancy rate that we’ve experienced,” says Beth Burnham Mace, NIC’s chief economist. “Meanwhile, the construction starts data suggest a slowdown in development activity, especially for assisted living. This should lay the groundwork for improving sector performance, provided there are no significant hiccups that could affect demand, such as drop in consumer confidence, a crash in the stock market or a broad-based economic recession.”

NIC’s Primary Markets saw 17,932 new construction starts in the last four quarters, the fewest new starts since 2014. These construction starts amounted to 2.8 percent of total existing senior housing inventory, down from 4.0 percent a year ago and 4.6 percent in late 2017.

Survey: Only 25 Percent of Nursing Homes Confident They Will Survive to Next Year July 7, 2021 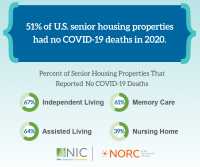