The $81 million project will convert the former 10-story Ravenswood Hospital — which was built in 1974 and has been vacant since 2002 — into affordable rental units.

The property will total 74 independent living apartments for low-income residents and 119 units under the Illinois Supportive Living program, which allows government reimbursement for assisted living services. While the two communities will be located in the same building, they will have separate entrances and operate independently from each other.

“This important project is a rare opportunity to bring much-needed affordable senior housing to Chicago’s North Side while establishing a viable financing model that can be applied to future senior developments across the country, especially as the population continues to age,” says Jeff Rappin, founder and chairman of Evergreen Real Estate Group.

While the former hospital is not an official historic property, Evergreen plans to revitalize and maintain much of the original structure. Structural changes will include the addition of an elevator and staircase at the entrance of the independent living community to improve accessibility for residents and guests. Existing elevators will be modernized, and the apartment conversdion will include new walls, HVAC and some new window openings.

“We used financing tools that weren’t necessarily designed to be used together, such as public housing tools, tax credit programs and the Medicaid waiver program,” says Rappin. “Using two of these together is fairly common, but all three is very unusual, which underscores the creativity required to get projects like this off the ground.”

The Ravenswood Senior Living project is the third affordable seniors housing community that Evergreen has developed on Chicago’s North Side over the past year. In 2019, the firm partnered with the CHA, Chicago Public Library and Chicago’s Department of Housing on a pair of developments — Independence Apartments and Library and Northtown Apartments and Library at 6800 N. Western Ave. — that co-locate low-income seniors housing with new public library branches. 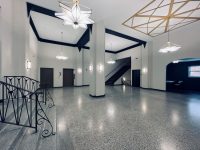