Recent data released by Johns Hopkins University and the Centers for Medicare & Medicaid Services (CMS) show that with the recent spike in new COVID cases in the general U.S. population, weekly nursing home cases are also on the rise. According to Johns Hopkins, weekly new COVID cases in the general U.S. population rose by 140 percent the week of Nov. 1, and the country now sits at more than 12 million people who have been infected. A correlating uptick in new cases in nursing homes occurred when cases in the surrounding community started rising back in mid-September.

“Our worst fears have come true as COVID runs rampant among the general population, and long-term care facilities are powerless to fully prevent it from entering due to its asymptomatic and pre-symptomatic spread,” says Mark Parkinson, president and CEO of AHCA/NCAL. “Our healthcare heroes are doing everything they can to prevent it from spreading further, but this level of COVID nationwide puts serious strain on our workforce, supplies and testing capacity. If everybody would wear a mask and social distance to reduce the level of COVID in the community, we know we would dramatically reduce these rates in long-term care facilities.”

The report also showed COVID-related deaths in nursing homes have risen slightly. Nursing home residents are typically older adults with multiple chronic conditions, making them most vulnerable to COVID-19. Residents of long-term care facilities account for only 8 percent of the nation’s cases, yet 40 percent of its deaths. While mortality rates have decreased compared to the spring due to a better understanding of the virus, better treatments and government resources to help reduce spread, industry leaders remain deeply concerned that the rising number of new COVID cases in facilities will ultimately lead to an increasing number of deaths.

“We are especially concerned that this situation will only get worse with Thanksgiving just around the corner,” says Parkinson. “The public must realize that their actions not only endanger our nation’s most vulnerable, but also trigger government lockdowns of facilities, keeping these residents from their loved ones. This is detrimental to their health, well-being and happiness. We urge everyone to do their part to slow the spread immediately and exercise caution when celebrating Thanksgiving.”

AHCA Survey: Over Half of Skilled Nursing Facilities Operating at a Loss Due to Pandemic August 14, 2020 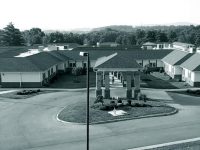