Ignite Medical Resorts, in the company’s first partnership with LTC, will operate both properties.

In the first transaction, LTC acquired the 90-bed Kansas City facility for $19.5 million. The property was just completed in 2018. The lease term is 12 years at an initial cash yield of 8.3 percent, escalating 2 percent annually, with two five-year renewal options. The center averages 90 percent occupancy and generates more than $1 million in monthly revenue.

In the second deal, LTC acquired a parcel of land in Independence to develop a 90-bed facility. Total development costs are estimated at $17.4 million.

Upon certificate of occupancy and licensure, the center will have a 12-year lease at an initial cash yield of 9.3 percent, escalating 2 percent annually, with two five-year renewal options. Completion is scheduled for the fall of 2020.

“These acquisitions represent our positive outlook on the next generation of post-acute skilled nursing,” says Wendy Simpson, LTC’s CEO and President. 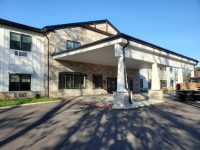